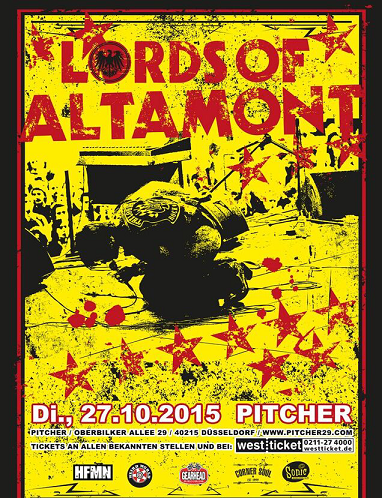 The Lords Of Altamont are excited to announce the start of their 2015 Fall tour. Riding a wave of accolades in the wake of their latest album, The Lords Take Altamont, the band will do selected EU shows, beginning in Dusseldorf Tuesday Oct 27 and including a date with The Sonics the day after in Berlin.
Thereafter they will be heading west to embark on a run of 19 shows across the North American Southwest and West Coast. For this tour, The Lords will be on a star-studded bill with The BellRays and Reverend Horton Heat. “We’re excited to be playing with The BellRays and the Rev,” says Jake, “not only are they two of the best and hardest touring bands out there, they’re two bands we really respect. It is an awesome triple bill and I”m really looking forward to it!”